Last time we got to the point of having an app that aggregates nutritional values for some ingredients and displays them as a % of the recommended daily amounts for the user given their age and gender. This time we'll take a critical look at our app and its shortfalls.

We'll start our search by playing with the app freely, trying out scenarios that we'd expect to work or not to work.

Cases that we'd expect not to work are easy enough to generate:

Cases that we'd expect to work are a bit harder. There are many possibilities. One approach is to try real recipes, fix issues and track whether the rate of new issues declines. First let's try the failure cases.

no results are displayed. Arguably this is correct behaviour because no ingredients can be matched. What about...?

We get matched ingredients:

This is clearly wrong. Firstly, 4 tbsp is not an ingredient. Secondly, it's inconsistent with the previous result where 4 tbsp was unmatched.

We also get invalid nutrient values - all the numbers are poisoned with NaN.

It looks like unmatched lines are not being handled gracefully and are trashing the calculation. We need to filter them out before they can wreak havoc.

Again no results - looks reasonable. However, add in a spud and we're in trouble again:

As with the missing ingredient name, we get the quantity appearing as a matched ingredient and NaNs for all the nutrient values.

What happens if we use a unit that isn't recognised by the classifier? How about the following?

The result is actually ok... the unrecognised unit is ignored and only the number and ingredient are matched:

This produces some incorrect matches:

but again, they haven't poisoned the calculation. Arguably word numbers up to ten should be understood and so should decimals with no leading zero. 1..5 is plainly invalid input so we can just be thankful it didn't break anything.

The first amount is taken and the second is ignored:

Not exactly correct but it's sensible and didn't cause any bizarre behaviour.

This produces the following match:

It's taken the first ingredient but the most specific amount resulting in a cross-over between the two ingredients. Again though, no nasty contamination of the calculation and the user can easily fix the issue by editing the input

Next we'll try using ingredients from some recipes on the web.

This fails quite badly as the page shows the loading indicator ad infinitum... 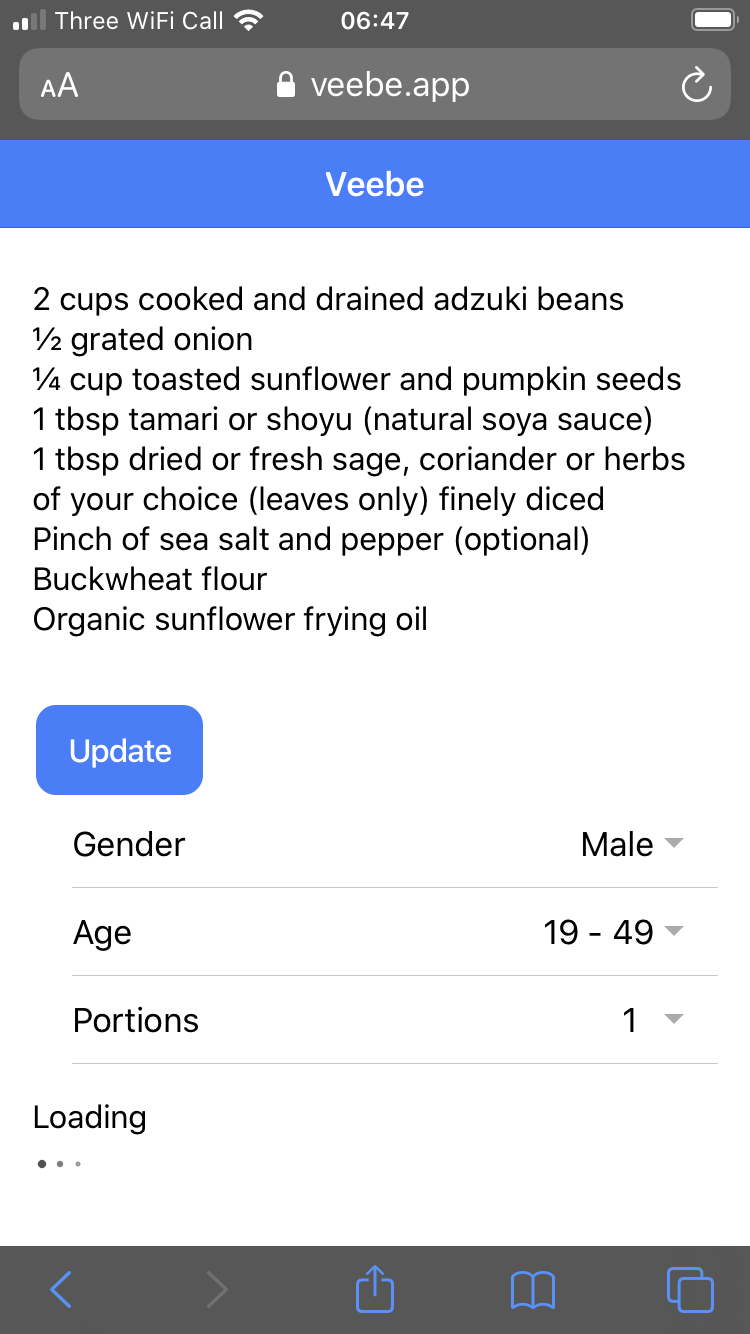 We've collected enough issues for now - let summarise and fix them before going any further with the bug hunt:

It's clear to see the source of this bug from inspecting part of the render method that outputs the matches and nutrient values (details elided):

And if there are no matched FDC components then nutrientCounts will be empty:

This now consistently reports all matches - even partial matches where the ingredient wasn't matched but the quantity was. Aggregated nutrients are only shown where at least one component was matched.

Looking at the aggregation calculation, there is clearly a bug on this line

Where the ingredient is unmatched, iq.components.length is zero and therefore the above line will produce a division by zero.

We know that in this situation, the numerator (sum) will also be zero so it's safe to limit the minimum length to 1:

We also need to avoid including unmatched ingredients in the aggregation calculation as these will be missing nutrition values and thus propagate NaNs. We can do this with a simple filter at the top of the calcAggregated method:

Fixing this is simply a case of updating our number rule to accept no leading zero by adding a new case \.\d+:

Decimals with no leading zero not understood

Similarly, the issue here is that the only word numbers understood are a and and:

We need to add in the additional word numbers:

Examining the console output we can see that an exception has occurred because the server response did not contain the necessary CORS headers to allow access to the data:

That's a bit strange - why does this recipe cause problems with the CORS headers? The answer is that our error handling on the server isn't very good and an exception has caused it to bypass our code that applies the headers and return a default error response. So this tells us nothing about the underlying failure but we should fix it to avoid confusion.

Now we just need to modify our app to handle the error. We'll highlight ingredients with an error in red and output the error text instead of the number, unit and ingredient:

Let's also output (unknown ingredient) if there were no component foods found: 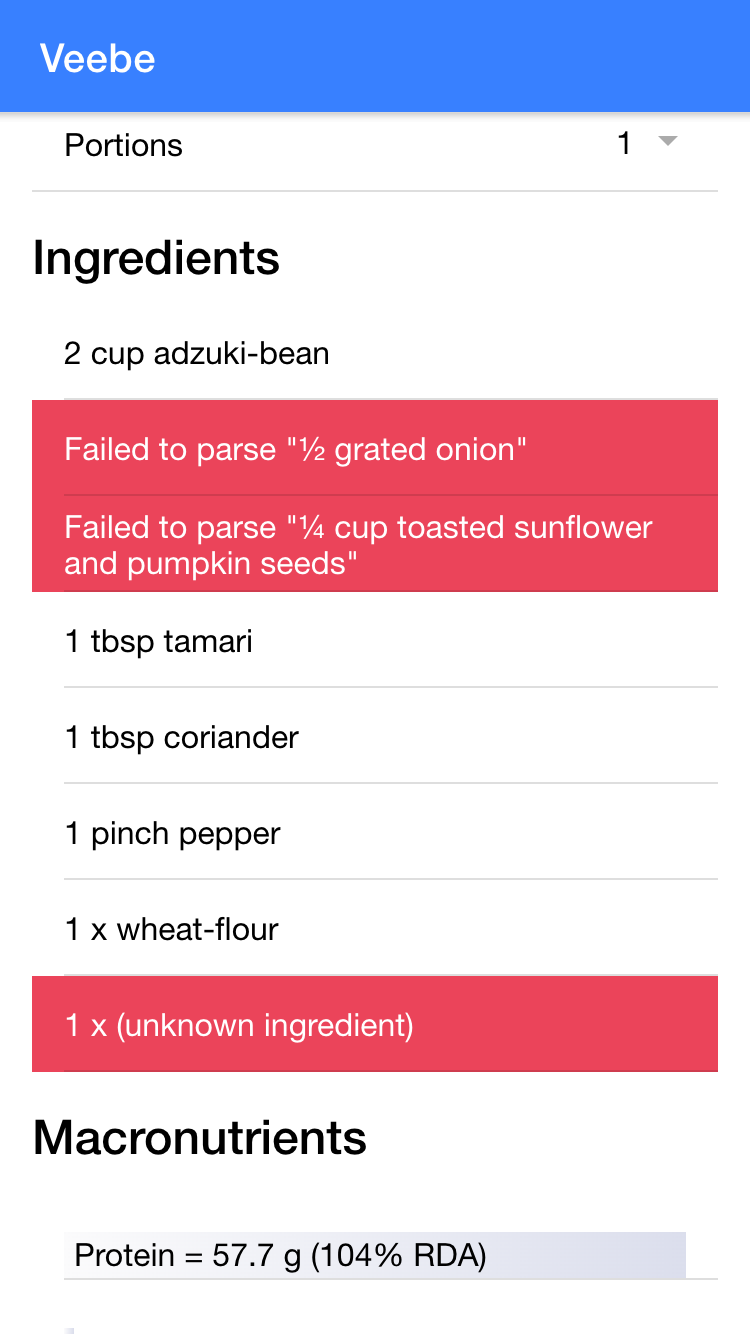 Having handled the errors better we can now investigate the source of the problem. This is most easily done by running locally in the debugger. Doing so produces the following exception:

We are naively converting our number string to a float, which only works for a subset of the formats we have allowed in our regex. We need a conversion function that can handle fraction characters, slash fractions and word numbers:

The only remaining issue is that the last ingredient was not matched:

We'd expect it to match this entry in our ingredient map:

The trouble is it's trying to match sunflower oil as a complete phrase. We need to rework our classify_ingredients function to match all the keywords separately. Firstly, let's rename keywords to key_phrases in the ing class. We'll use the term 'key phrase' for a group of 'key words':

Now we'll update classify_ingredients. Firstly we need to change it to match a key phrase if all of the key words in it are found:

Then we try to substitute the classified key phrase for the original key phrase:

If it doesn't exist as a whole phrase in the original string then we strip out words that match the key words in the key phrase and append the classified key phrase to the end:

Last time we made our web app more robust by testing edge cases and fixing bugs. This time we'll refine the ingredient data to improve performance and accuracy. There are a couple of issues with our ingredient database that can reduce the quality and

404 Apparently TSO Host got fed up of hosting my site and deleted all of my data. I was able to recover almost everything from a recent backup but sadly the original of this post has been consigned to oblivion. I debated writing it